ThermNiche: The role of the thermal niche in past warming worlds 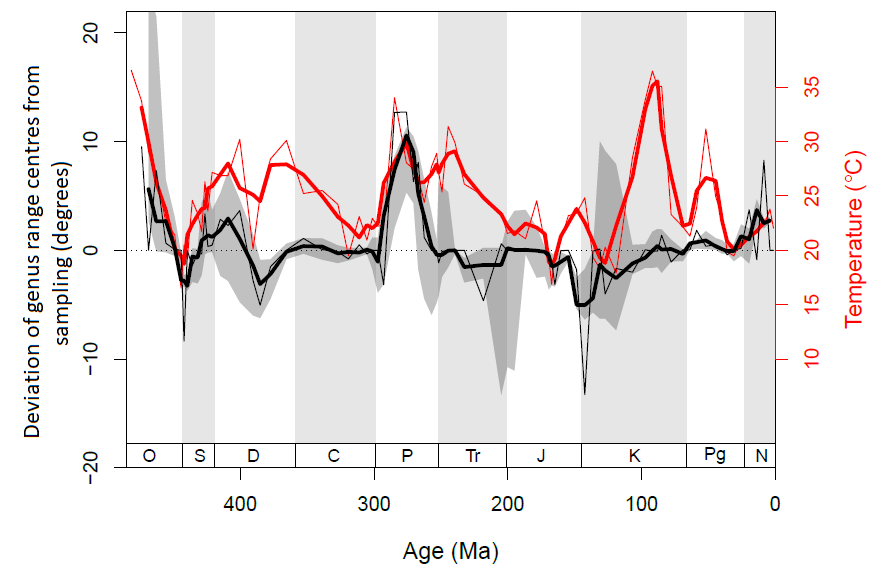 Understanding the dynamics of past and present ecosystems and predicting directional changes in response to climate change are long-standing challenges in (paleo-)ecology. We propose to apply the concept of the thermal niche to study the effects of climate warming on shifts in the latitudinal distribution of species and in the thermal structure of faunal assemblages. Using occurrence data of marine benthic macroinvertebrates and maps of seawater temperatures derived from oxygen isotopes and climate modelling, we address in detail the effects of climatic ups and downs during the Pliensbachian-Toarcian (Early Jurassic) time interval, and at a lower resolution the Phanerozoic eon. We test whether warming has a predictable effect on the latitudinal ranges of species, alongside the hypothesis that warming preferentially results in poleward shifts of species (Fig. 1). Thermal niches may help us predict assemblage responses, based on the width of a species thermal tolerance and perhaps its location. Therefore, assemblage responses may not be uniform over different latitudes. Modern global warming is expected to most severely affect tropical species and polar species. We assess whether the inferred mechanisms have remained constant through time or if there are other response patterns possible. Understanding the role of the thermal niche, we expect to contribute knowledge about the extent to which marine ecosystems remain cohesive or are transformed in the face of climate change.

This is the official Twitter account of the DFG-funded Research Unit TERSANE: Temperature-related stressors as a unifying principle in ancient extinctions

Want to go to #EGU23 and have something cool to report about past responses to climate warming, this should be your session 😉 Abstract deadline TOMORROW 13:00 (CET)!
@RU_TERSANE
https://meetingorganizer.copernicus.org/EGU23/session/44968